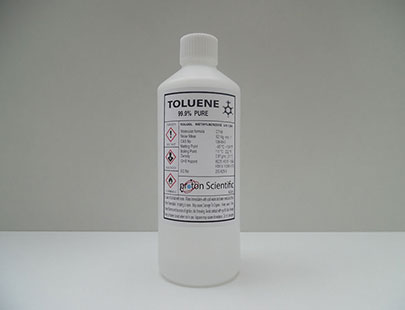 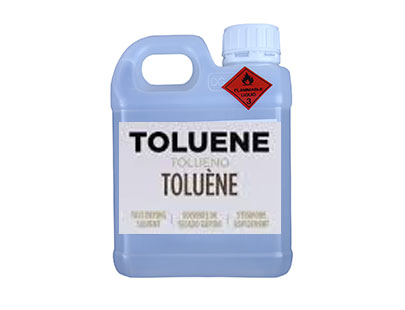 Toluene, also known as methylbenzene, is a clear, colorless liquid with a distinctive sweet smell that is widely used in industrial settings as a  solvent . Toluene also is an ingredient in some consumer products such as paints, glues and nail polish removers.

Toluene occurs naturally  in crude oil and in the tolu tree. It also is produced when manufacturing gasoline and other fuels from crude oil and in making coke, a type of fuel derived from coal that is used to make steel.

Toluene is typically used in the production of paints, rubber, lacquers, glues and adhesives because it can help dry, dissolve and thin other substances. It is used in the production process to make other chemicals, including  benzene , nylon,  plastics , and  polyurethane  and in the synthesis of trinitrotoluene (TNT), benzoic acid, benzoyl chloride and  toluene diisocyanate .

Toluene has been used as an ingredient in nail polish removers, due to its ability to help dissolve other substances, such as resins and plasticizers. It has also been used in the formulation of nail products to enable nail polishes, hardeners and lacquers to be applied smoothly.

Toluene is produced in the manufacturing of gasoline, and it is also a gasoline additive that can be used to improve octane ratings for fuel used in race cars and other automobiles. The

higher the octane number or rating, the greater the fuel’s resistance to knocking or pinging during combustion. Toluene is used in these applications because it is dense and  contains significant energy per unit of volume, which enhances power generation for vehicles.

Toluene is added to gasoline, used to produce  benzene , and used as a solvent. Exposure to toluene may occur from breathing ambient or indoor air affected by such sources. The central nervous system (CNS) is the primary target organ for toluene toxicity in both humans and animals for acute (short-term) and chronic (long-term) exposures. CNS dysfunction and narcosis have been frequently observed in humans acutely exposed to elevated airborne levels of toluene; symptoms include fatigue, sleepiness, headaches, and nausea. CNS depression has been reported to occur in chronic abusers exposed to high levels of toluene. Chronic inhalation exposure of humans to toluene also causes irritation of the upper respiratory tract and eyes, sore throat, dizziness, and headache. Human studies have reported developmental effects, such as CNS dysfunction, attention deficits, and minor craniofacial and limb anomalies, in the children of pregnant women exposed to high levels of toluene or mixed solvents by inhalation. EPA has concluded that that there is inadequate information to assess the carcinogenic potential of toluene.